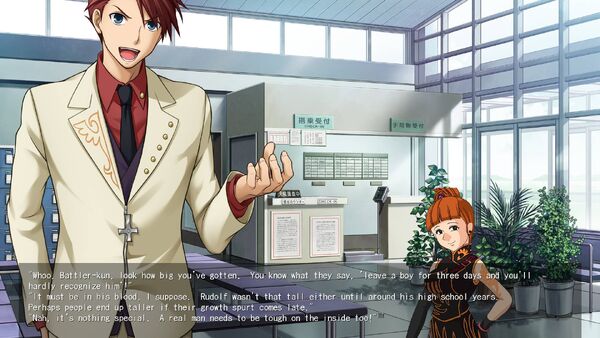 Screenshots should be provided whenever possible and should also include a good block of text so that the error can be located.

It should be noted that duplicate bug reports will be deleted.

All of this has been found in the Shanon and George date scene of Episode 2 (right at the beginning).

This one, the previous background and the next one used show a sunny day, yet it's supposed to show a cloudy day (as you can see after the last one).

As you can see, parts of coding that shouldn't appear. Also, the voice doesn't work for that part.

I ran into a sort of bug in the episode 4 tea party. It happens when Battler is looking for Kanon's body some wierd F11 thing appears in yellow text on the upper left hand corner it dispears once you advance the text.I just thought it was kinda odd. Screen cap bellow, when you run your pointer over it it highlights and turns green.

Description: In EP3, when Eva is thinking about the epitaph appears two sprites of young Eva. The text in English would be "Think in a river. A river...."

Description : The sprites and backgrounds are still old. Also whenever I load a saved file that was saved while a CG was playing it wouldn't just skip to another scene it will play the music from said scene also. In this image the song playing is the happy and carefree version of Happiness of Marionette

Category(ie. backgrounds, sprites etc.) :Sprites
Version(ver0.1etc.) : .98
Description : Sprites have not been resized for this scene
Screenshot:

Ok well then I guess it'll be more difficult to resize them then the sprites because of that and it will probably look weird.

Category: CG
Version: 0.99a
Description: Bug with Maria CG. First, it moves too far left, leaving a black space of the right (screenshot 1). Second, it does not disappear after that, until Natsuhi's duel with Beatrice starts (screenshot 2).
Screenshot: (1), (2)

Category: Sprites (?)
Version: 0.99a
Description: character sprites in character list have reverted to the original ones.
Screenshot:
(edit by the original editor: this problem was solved by re-downloading from Rapidshare)
(note for this and previous one: I downloaded the patch from Mediafire, if it matters; and I used a savegame made in 0.98) 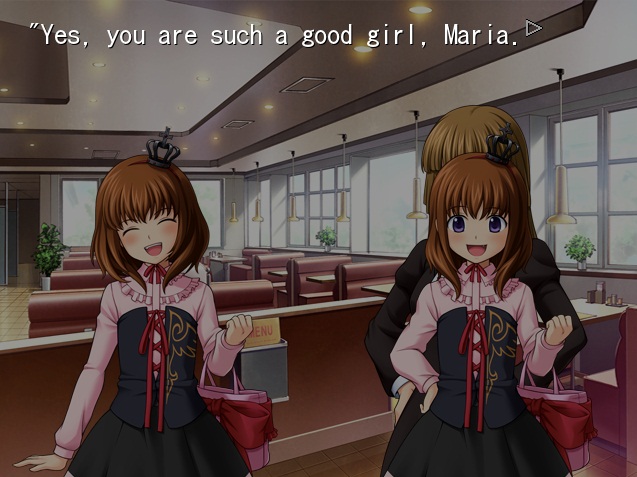 Description: During Episode 1, just after the image of Maria standing in front of wall singing is shown.

-> A few scenes after that, just before Natsuhi faces Beatrice. {C}{C}

Also, this continues until the scene switches to the door trying to be opened by Battler and the others.

Version(ver0.1etc.) : .99 rev 1
Description : Not sure if this is an error, but in the scene between the Now Beatrice and Former Beatrice, this happened, one of the sprites is only half visible on the screen.

Category: Backgrounds
Version: 0.99
Description: During the EP2 intro, before the moment on the screenshot, the background has clear sky, but changes to cloudy at that point. It also changes back and forth after that. According to the text, it should be cloudy all the way.
Screenshot:

Version: 0.99
Description: "..and now your having trouble saying that it's alright to meet him." - should be "you're" instead.

Version(ver0.1etc.) : .99b
Description : While playing EP03 dock scene (almost after the opening) from a .99a saved game, the scene suddenly shifted to the Ghost Kanon scene from EP02. When I pressed left, Nanjo appeared, asking Kumasawa for a first aid kit, and then the scene changed from the dock to the room where Kanon kills Kumasawa and Nanjo.

Version: 0.99b
Description: Near the end of episode 3 there is a single line that is broken. 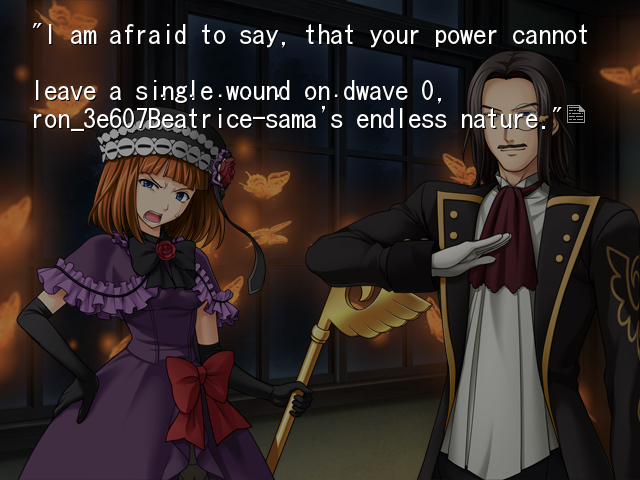 Version: 0.99b
Description: In episode 3, you forgot to update one of EVA-Beatrice's sprites. It shows up multiple times during episode 3. 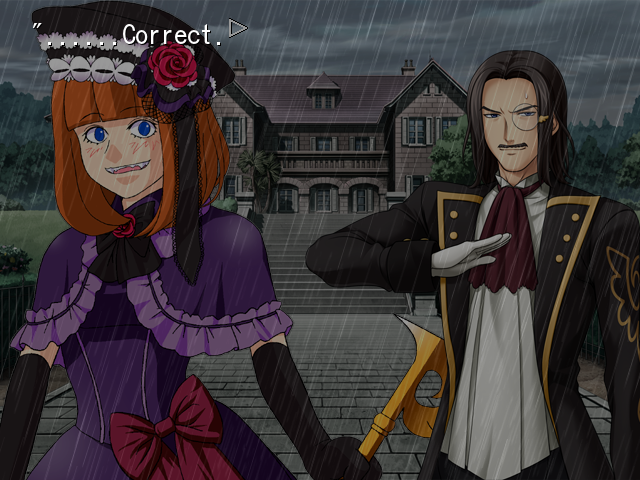 '''Description: In episode 4 there seems to be a single line broken when Ange tries to figure out how only Eva survived on the Island. 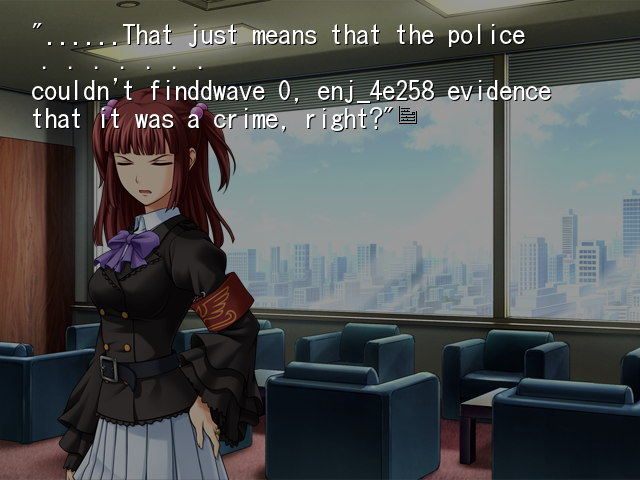 '''Description: In episode 3 When Battler's ends listening the explanation for the first twillight and poitns out to beatrice The CG image of battler that comes out seems rather out of place or incomplete. because a few minutes later it appears with backgriound. 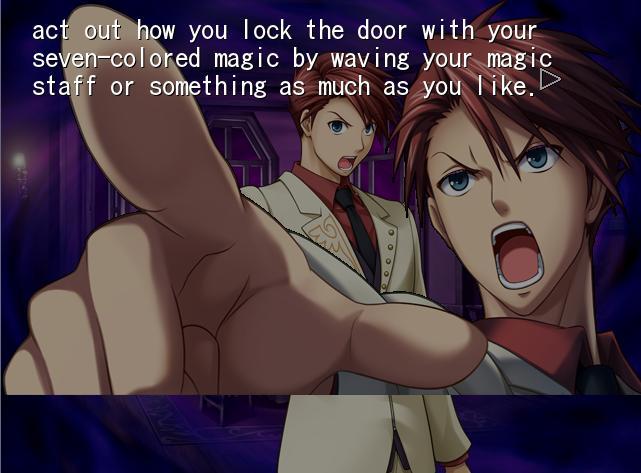 '''Description: In episode 4 When beato is speaking with Ronove about Battler'condition after the end of the third game. The line: "..... Is it really that serious...?" Is bugged and has the voice from the previous line.

Same thing Hapens with the line of battler fighting with Beelzebub. Line is: "Be a good girls and give it heeeeeere,". Captcha is under Beato's. 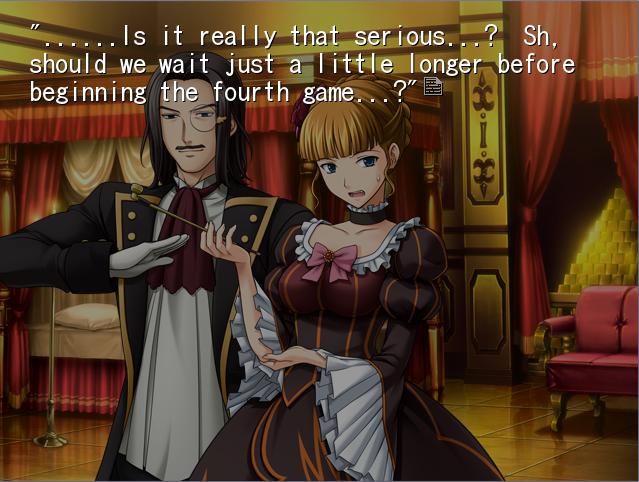 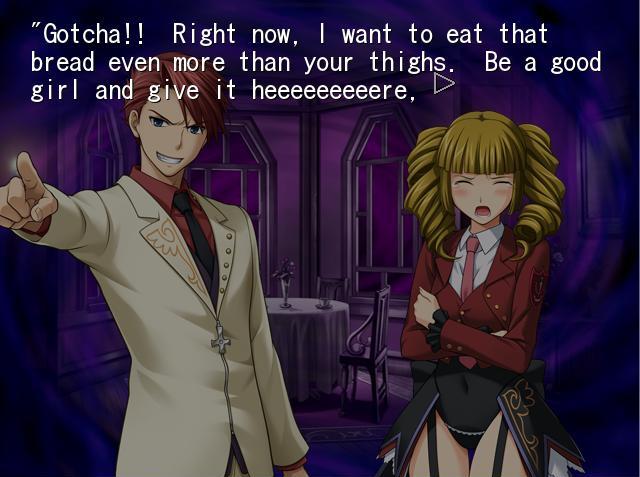 Description: I just downloaded the new twek version for the first time, and I can't get my save files to work right from the previous offical release. for example if I try to load a save file for the induction ceramony I get the (what I think is the right background art and at first eva-beatrice but then the dialouge pops up talking about jessica going after kanon and then.

Sorry but, as we have previously mentioned, save files get corrupted everytime you update your patch. There's really no way around it :( 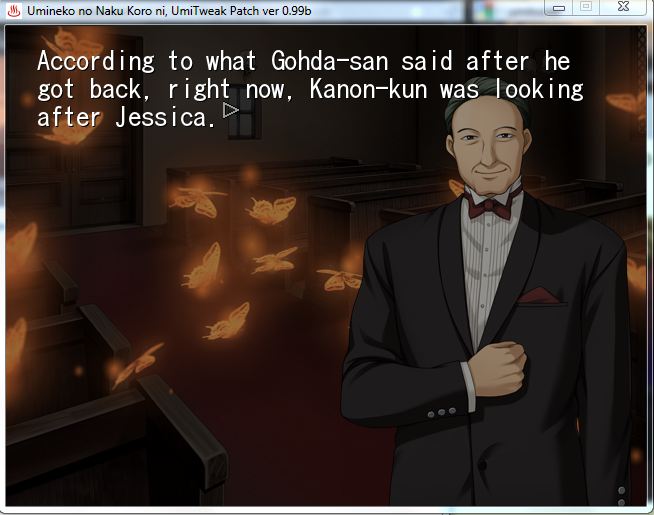 When I press loading, there is nothing except the bottom. Ditto for when I want to save something for the game, it's frustrating. I try to click anywhere to record, and on loading, I click no it works. If there is a solution, I accept it gladly.

Category(ie. backgrounds, sprites etc.) : Script
Version(ver0.1etc.) : 0.99c
Description : I get to the line below in Episode 2 and cannot go any further as Jessica's Sprite changes expression, after which the game crashes and gives me an error about returning "255". I'm running Mac OSX and have alternated between Crossover Games and the Mac version of OnScripter, both of which crash exactly at the same point. 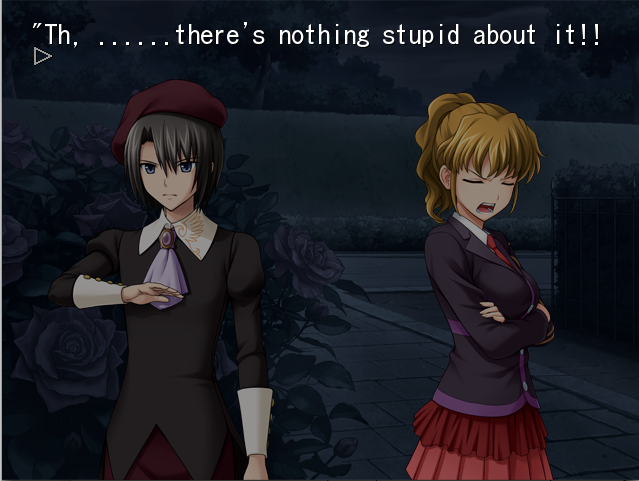 I was able to get the following from the console:
[0x0-0x3f23f2].net.haeleth.ONScripter-En[8117] **** Script error, Array No. is not declared. [`And, George nii-san's a wonderful person, and he's bearing both of his parents' expectations.@dwave 0, jes_2e308`...Yeah,whenitcomestomarriage,I'msureEvaoba-sanwillinterfereinvariousways,and,umm,Ithinktheirfutureprospectslooklikethey'llbefulloftrouble,alright] ***

Category: Voices
Version: 0.99c rev.1
Description: Some lines don't have voices:
- (EP3) During Battler and Beato's debate over the first twilight, Battler's "So, Shannon-chan's parlor satisfies 'Beatrice's closed room definition'?".
- (EP3) During Battler and EVA-Beatrice's match (Hideyoshi's testimony), EVA-Beatrice's "Sure, say it in red!".
- (EP3) In the same match (Kyrie's motive for going out), Battler's "It's checkmaaaaaaaaaaaaaaaaate!!".
- (EP4) In the flashback of Maria summoning the Seven Sisters, Sakutaro's "If we don't return to the room, you'll be scolded.".
- (EP4) In the BEST MOM EVER scene, Rosa's "I don't know I don't know I don't know anything about Hokkaido don't just go ahead and say something like thaaaaaaaaaaaaaaaaaaaaaaaaaaat!!!".
- (EP4) In the scene of Kinzo visiting the hostages, Kinzo's "If even one of them can surprise me, I'll call the ceremony off.".
- (EP4) In the scene of Kinzo watching over Jessica's test, Siesta 00's "Animal fodder...would be an honor......!".
- (EP4) In the scene of Virgilia consoling the Siestas right after that, Virgilia's "I'll make you some delicious tea......".
- (EP4) During George's test, Gaap's "So, you can sacrifice everything else as long as you can get married......?".
- (EP4) During George's fight with Gaap, Gaap's "If you get down on your hands and knees and apologize, I'll forgive your rudeness towards me.".
- (EP4) In the same fight, Gaap's "You aren't going to say it's because I'm a woman, right?!!".
- (EP4, Tea Party) During Battler and Beato's battle over the 2nd game, Battler's "If Kanon-kun's death was proclaimed with the red, there's no way he was alive.".
- (EP4, ????) During Bern and Lambda's discussion, Lambda's "A power-up from and Ange-flavored hamburger?".
- (EP4, ????) Bern and Lambda's "Beato certainly cannot win.".
Screenshot: Not necessary, but I can add them if needed.

Category : CG/Clock
Version : 0.99c
Description : During some of the most final scenes of Episode 1, when time passes the clock seems to be getting bigger and bigger till it took up the whole area of the ONScripter.
Screenshot : 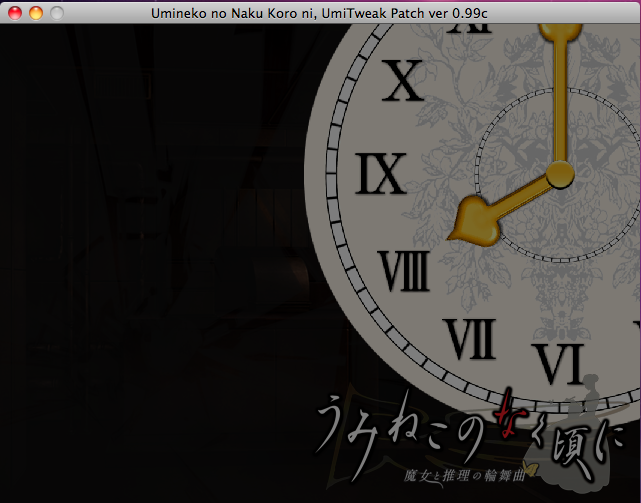 Version (Ver 0.1, etc.) :0.99c Description : If the text is set on auto and you click when you get to the transistion part (with the clock or the Umineko logo) between the chapters, the game will always freeze. I've finished the game and it happened constantly.