What's on your mind?

So i was revently on their website looking at their games and such for when the new version of Higurashi was coming out. looking at the game i spotted Higurashi Kai and decided to look at it since it was now on sale, and low and behold their now selling the bundle version not all four arcs no their selling the all in one freaking game now after all this time.

Since im here asking all of the files for Kai and all four of its arcs have been Tweaked by the people at HigurashiTweaks. and since they now have out the all in one bundle version of kai, how would i or anyone else be able to tweak the all in one version of kai with the allready pre existing files from all four seperate files??

Category (e.g. backgrounds, sprites, etc.) : Sprites
Version (Ver 0.1, etc.) : 2.00
Description : In episode 3, during the fight between Kanon and Lucifer in Kinzo's study, none of the character sprites appear on screen. The issue begins shortly before Lucifer's entrance and persists throught the end of the scene. CG's,backgrounds, insert images and action effects all appear as usual. Only the normal character sprites are absent, and all reappear in the following scene (death of Genji/Kumasawa). I have confirmed that the problem did not exist in version 0.99c (see screenshot). I have also confirmed that the problem is unrelated to the .nsa files for the sprites.
Screenshot:

I cleared my computer a bit and deleted many things, I propably deleted also some necessary files for umineko.

I get the error message "could not find the fond file 'default.tff'.

Does anyone know wich part of the patch or the original game contains this file?

(edited by A Fandom user)

1) In EP5, chapter "Ten Wedges to Pierce Witches", Beatrice's line "inside a stone," sometimes does not play the voice. It was unvoiced most of the times I read the scene on autoplay, but just now I couldn't reproduce it both with and without auto. Occasionally, a different line from the same screen skips the voice, while that line plays its own. In other words, something is wrong with voices in that auto-scrolling part.

2) In EP6, during the final duel between Erika and Battler/Beatrice, Erika's line "Hi, pleased to meet you" plays the voice for her previous line ("and my self-introduction!!"). In other words, the same voice is played twice in a row.

Hope this will be fixed if you make a bugfix patch.

I decided to make this thread for custom textboxes, if anyone's interested in making their own or whatever.

For example, here's the one I use. Just extract the "bmp" folder and place it into the patch folder. I used the butterfly textbox as a base, don't sue me, please. 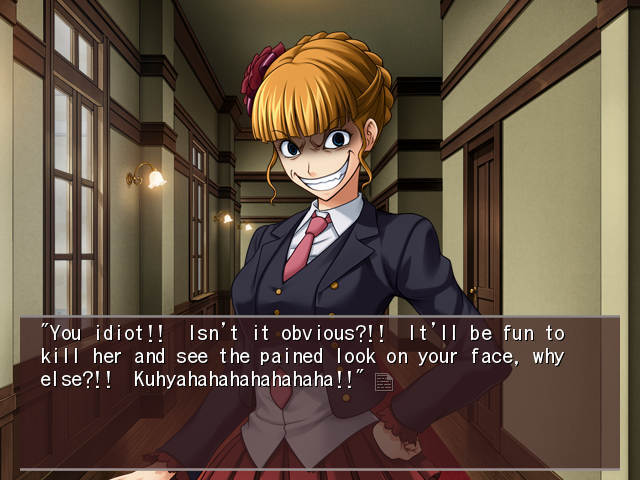 (edited by Shizuka3)
Umineko : When they Cry "Nocturne of Truth and Illusions" (EP5-8)

In first - I`m not good in english, sorry for errors.

I did a Japanese version of nscript.dat and fully tested game. Corrected a lot of mistakes or not correctly inserted voices and a number of other errors. Ready and tested file posted here ( link not eternal ):

But a large part of the text in pictures. Some images , where no new graphics , I took from the old Japanese version , but some images of the Japanese version will not work , since they are made under the old graphics ( kakera , Omake , etc.). Can I get a picture of the Japanese PS3 arc, arc1, arc4 and videos from arc6 without English translation? All pictures do not need, enough of those where there is text. But I think you find it easier to lay out a whole than themselves seek out the files.

When the credits start rolling, it crashes immediately ( I couldn't tell it was that until i tried opening it without the umifix )

So, another bug report. This one is more serious. It is an error regarding the "Lure" BGM in the music box.

(I'd have given the Japanese name as well, but since my Japanese sucks, I thought I'd just upload a screenshot.)

Anyway, an error occurs whenever you try to play this song on the music box in fullscreen mode, and the game crashes.

If you try playing it in windowed mode, then switch to fullscreen mode, it works fine, but not if you try selecting it directly from fullscreen mode. It's quite the odd error. 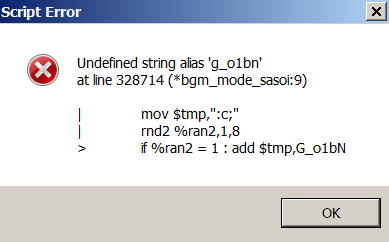 (edited by 나이)
Umineko : When they Cry "Nocturne of Truth and Illusions" (EP5-8)

Well, this isn't a huge bug, but I figured I'd report it anyways.

In Bernkastel's game in EP8, when you want to check the purple truth by character and check Nanjo's, his graphic changes to the original version whenever you press the "Next" button.

When you first check his purple truths, his graphic appears as normal, as it is supposed to.

However, once you press the "Next" button, his graphic changes to the original version, and it won't change back unless you select another character's purple truths.

Pressing the "Back" button still leaves him with his original graphic, as can be seen by this final screenshot.

I know it's a really small thing, but I wanted to report it anyway, just to let it be known in case you guys upload a patch with fixes later (or if you ever get to editing the graphics for the music boxes, for example, altho it isn't needed, of course).

EDIT: oh, this only applies to Nanjo, by the way. All of the cousins (except for Maria) also have two pages of purple truths, but nevertheless, pressing Next or Back does not affect their graphics.

(edited by 나이)
Umineko : When they Cry "Nocturne of Truth and Illusions" (EP5-8)

(edited by A Fandom user)
Umineko : When they Cry "Nocturne of Truth and Illusions" (EP5-8)
Guidelines